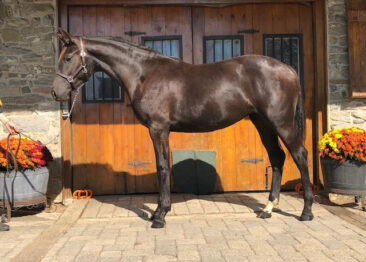 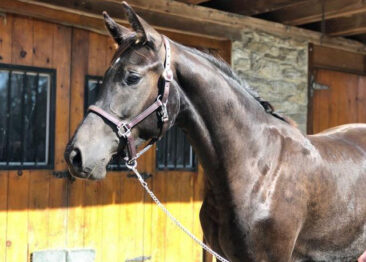 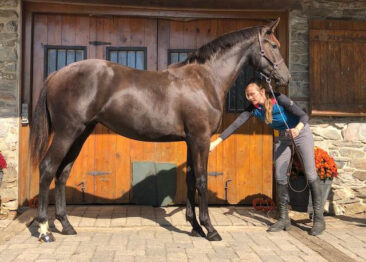 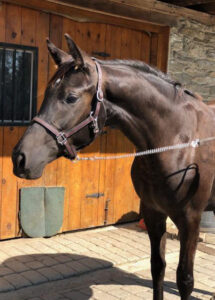 Odalise is a beautiful dark bay filly with a star. A very elegant, modern type likely to mature in the 16.3 hd range.  We can tell you she loves coming into the barn for grooming and attention and is good for farrier work.   She appears to have a good mind and is a joy to work around on the ground.
Florianus II is everything you want in a modern sport horse. He is kind, with good conformation and supple, elastic gaits. His bloodlines represent the cream of the international crop. They are matched by his own outstanding and long career at Grand Prix in the most competitive arenas in Europe and North America. As a sire, his offspring have won at the highest level of sport, and are recognized for their extraordinary character, rideability and movement.  Florianus was awarded the Crown performance predicate by KWPN-NA, earned by competing at FEI levels and ranked within the 300 top dressage or jumping horses in the WBFSH/FEI rankings.
Florianus II has an incredible work ethic. His flexibility and scope, along with with an outstanding ability to collect, helped him excel in the most difficult movements of passage, piaffe and pirouette.
Florestan I is the sire of over 80 approved sons, including Fidermark, a four-year-old champion at the Bundeschampionate and a Grand Prix performer, now sadly deceased. The mare, Ferrara won the five-year-old class at the Bundeschampionate and went on to compete at Prix St Georges level with Isabell Werth. Florestan I has sired almost a thousand registered broodmares, 190 of whom have been awarded a States Premium.
Regalia, sired by Royal Prince is a valued broodmare producing outstanding offspring with incredible temperaments and rideabiity.   Many of which are going beautifully undersaddle and have started their dressage careers with their amateur owner/riders.  She is the dam of Serendipity and Sir Royale, full siblings sired by Sir Gregory, and De Nada who was sired by De Feiner Star and last year's filly Finca by Finery.
Royal Prince was Reserve Champion at his Stallion Performance Tests, earning 10’s for rideability and walk, and 9’s for trot, canter, and willingness to work. He twice represented the US at the FEI World Championships for Young Horses, including a 4th place finish in 2004, and competed through Prix St. Georges.
His sire, Rohdiamant, was a highly successful Grand Prix dressage competitor who was short-listed for the U.S. Olympic Team with Lisa Wilcox. Grandsire Rubinstein I also competed at the Grand Prix Level and has had a legendary influence on sport horse breeding around the world.
Odalise would be an outstanding young horse prospect for both the amateur and professional rider alike.    She is bred for trainability and temperament and could be a fabulous dressage prospect or a really fancy hunter prospect.  You decide.
Odalise is fully vaccinated, microchipped and has lifetime membership with USDF and USEF.
Priced  $18,500 - $20,000 (subject to change)